While 2011 will not be remembered as hip hop's greatest year, there were a number of noteworthy releases to celebrate.  These include the following:

Boston MC REKS proves that tenacity and talent will pay off in the end.  On this eponymous album REKS' rapid fire, intelligent flow is complemented by a stellar line up of producers including DJ Premier, Pete Rock, Alchemist and REKS' Boston buddy Statik Selektah.  Guest MCs include Freeway, L-il Fame and fellow Boston lyricist Terminology.  With such a diverse cast of contributors it would be easy for this album to become an inconsistent compilation.  However, the consistency of the album is one of its strongest points.  There is no fast forward material.  Indeed, plenty of tracks demand rewinds.  This is the album that REKS was destined to make.
The Roots: 'Undun' LP

The words 'concept album' would have many hip hop fans running away in fear.  However, The Roots yet again provide an album as consistent as it is diverse.  This is one of The Root's most hard hitting albums to date and anyone fearing they may lose focus with their 'Jimmy Fallon commitments' can breathe a sigh of relief as this is another addition to The Roots' catalogue of classic albums.  As a side note, this album should join Dr Dre's '2001' album as a master class in how a hip hop album should be mixed.
Elzhi: 'Elmatic' LP/Mixtape

An 'Illmatic' covers album would be blasphemy in the hands of a lesser MC.  However, Detroit's Elzhi had the skills and sincerity to not only do justice to, but also put his own spin on every track he reimagined.  Many MCs would have just rapped over the original instrumentals.  However, by collaborating with the Will Sessions Band, Elzhi was able to make the project come over well in a live setting.  Listeners new to Illmatic were given a funky hip hop lesson and fans of the original were given an enjoyable trip down 'Memory Lane'. 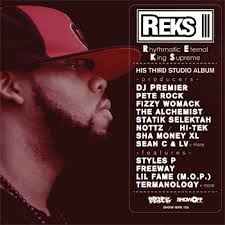