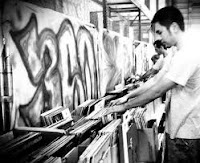 A nice short film on Hypoetical’s beat making process, which looks as good as it sounds.
Find out more: www.hypoetical.net

I’ve got the great honour and pleasure to be working on a forthcoming music podcast.

The podcast, called ‘Influenced’, will trace the path of new artists back to those which came before and reflect on how previous generations of music influenced those which followed their lead, be it directly or indirectly.

Playlists on Spotify and Apple Music will take the listener through our musical time travel in a mixtape fashion.

‘Influenced’ is the brainchild of a great friend of mine, Mark Williams. Mark is even more of a music enthusiast than me and his personality, charisma, enthusiasm and love for music is apparent to anyone who knows him, I’m sure.