Van Hunt Interview: The Man Hunt (From the Archives)

I've been playing the hell out of Van Hunt's excellent 2004 debut recently.  So I thought I'd share with you a feature that I was lucky enough to do roughly a year after the album's release.  This was originally published as 'The Man Hunt' in DRUM Magazine in 2005. 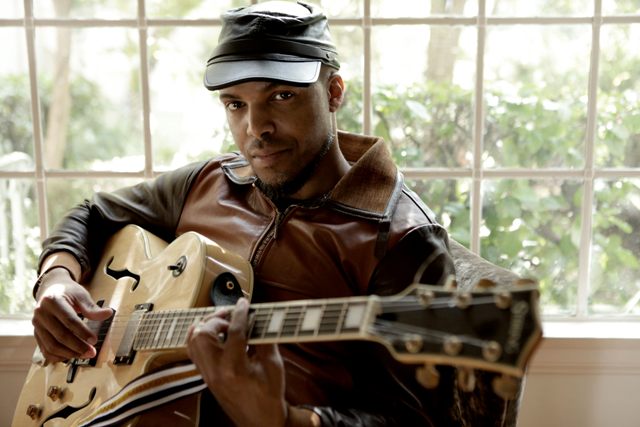 Dressed in a white short sleeved shirt, glossy black pants, butterscotch gator shoes and mandatory headwear - this time a cream flat cap pulled down to one side mischievously - he’s in jovial mood, offering me sandwiches in his West London hotel room hours before his gig at the Shepherd’s Bush Empire.  His buoyancy is apt, besides his birthday, the burgeoning superstar from Ohio has been described as ‘the new Prince’.
With so much love being thrown his way, I’m eager to find out which UK cats he likes:“Franz Ferdinand – everyone’s naming them now, so it’s not cool to say! (laughter), Keane; they get slated in the press, which is unfortunate. Graham Coxon, too.”

Van, disarmingly laid back, stares at me registering the surprise which is now graffiti across my face.  'You’re a fan of the UK Indie scene?’ I ask, feeling like I write for NME: ‘Yeah, I guess so!'.  His warm Southern drawl soon breaks out into ‘life is good’ laughter again.

One thing which does annoy him, however, is the rigid boundaries of American radio.  As an artist not peddling contemporary ‘urban’ music he complains: 'American radio? Pppft... You’re not gonna get much love there, apart from on the smaller stations. It’s pretty courageous for them to support you, ‘cause they’ve got to sell the big stuff or they can’t compete with majors'.

American radio? Pppft... You’re not gonna get much love there, apart from on the smaller stations. It’s pretty courageous for them to support you, ‘cause they’ve got to sell the big stuff or they can’t compete with majors.

The conversation becomes more positive again when discussing UK crowds: 'I love performing over here.  I was told UK audiences were subdued, but that hasn’t been the case; they’ve always come to party.  If the crowd meets me halfway we’re gonna have a great time.'

One of the very few embarrassing moments he’s had whilst performing happened over here, thanks to the presence of one of our under-appreciated soul queens.  'I performed with Mica Paris, I was really nervous because I have so much respect for her, she’s incredible, we were singing together and I was missing my lines'.

He soon regains his cool when describing his pre–gig routine: 'I go through such a ritual, like Larry Bird, who’d show up hours before a game to analyze the court.  I’m like that on stage – I’m there from the time of the sound check until it’s time to leave after the show. Look at Prince, his incredible work ethic at near 50 – that’s what I aspire to.'

As well as being inspired by Prince, Van muses 'Will anyone ever match Marvin Gaye’s ‘What’s Going On’? Maybe we’re all just wasting our time trying!'.  The writing of Mark Twain and the films of John Cassavetes come in for more praise, along with icons as diverse as Miles Davis, Richard Pryor, Sly Stone, Neil Young and Iggy Pop.

Will anyone ever match Marvin Gaye’s ‘What’s Going On’? Maybe we’re all just wasting our time trying!

The healthy attendance at the Shepherd’s Bush Empire is testament to how big Van looks destined to become.  Resplendent in a sharp salmon jacket and charcoal beret, again perched at a perfect angle, Van is living out his Larry Bird analogy, clearly having fun on stage.  Tracks like ‘Seconds of Pleasure’ - an epic, sensual ballad that originally started out as punk rock song - and ‘Down Here in Hell (With You)...’ get the warmest welcomes.

At the after party Van plays the gracious host, thanking those in attendance and asking for feedback on the performance.  Ironically, the bar’s DJ spends most of the night playing the same hip hop and RnB that has commercial radio and MTV in a chokehold, making it hard for Van - and Meshell Ndegeocello, Martin Luther, Omar and many more - to get as much exposure as deserved. 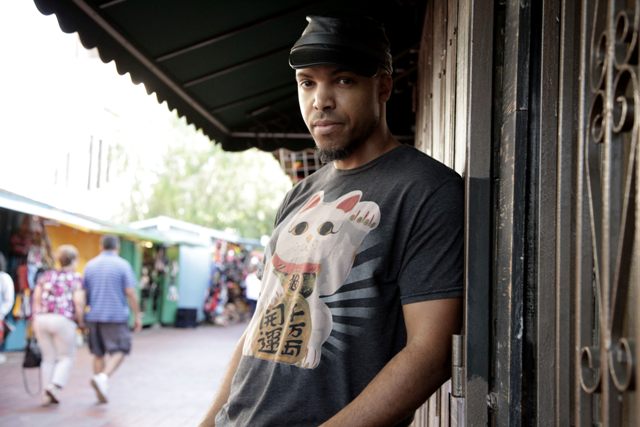 Stood in the centre of the dance floor, in the same smart attire as the gig, Van and his band, an elegant mix of black suits, shirts and bowlers, look like they accidentally stumbled into a wormhole and have traveled decades into the present day.  Van doesn’t seem to mind though, contentedly holding a glass of red wine, swapping pleasantries with the well wishers that loose their collective minds as ‘Drop It Like It’s Hot’ slinks its way from the DJ’s speakers.

The forces of yin and yang are balanced, Van is a ‘new artist’ who’s been around for years. By ignoring current trends, he has made an album which is new and fresh sounding.  By word of mouth recommendations instead of marketing force-fed to a jaded public, he is the name on everyone’s lips.

I think back to a comment made earlier in the day which shows that the man who sung of being ‘Out Of The Sky’ still has his feet on terra firma.  When asked of his ‘Urban Dandy’ dress sense and whether he has time to shop for clothes in London he replied; 'I’d like to hang out in London to record’.  More warm laughter filled the air, as he conceded whilst shaking his head, ‘but the clothes are expensive here'.
For more Van Hunt, visit:
vanhunt.com
twitter.com/vanhunt

This article has been slightly amended / truncated for stylistic reasons.