It's a hot July thanks in no small part to the good folks over at FilthyBroke Recordings.

Earlier this month they dropped the superb 'Best Buds Vol II'.  A compilation featuring some of the most exciting new artists from Chicago. 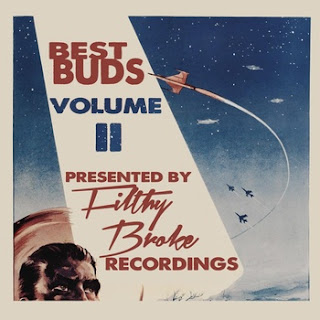 The project is of a consistently high standard, but immediate standouts include the dub-meets-g-funk of Morbidly-o-Beats & Hoot's 'GutterSnipes', the rugged beauty of 'THEURGY' by The New Beat Maker favourite Lanzo, the electronic soul of Julian Edwardes' 'Working You' and the string-heavy 'Divine Tree' by SEENMR.

The most impressive cut however, may be the haunting 'Montego Bay' by Zackey Force Funk.  Short and sweet, this sounds like a Prince b-side being performed in the mirror by a love-lorn HAL 9000, which, folks, can only ever be a good thing.

As if that wasn't enough, the aforementioned Morbidly-o-Beats goes for dolo this week, with the release of his 'The Beginning At Last Part 1'.

The sinister 'Bones Bare' is a powerful opener.  With its deliberate pace, ghostly moans and sleazy sax, the cut could easily be the soundtrack to a late-night 80's thriller in which a homicide detective becomes sexually obsessed with a seductive murder suspect. 'Heavily Influenced' sounds a little like Basement Jaxx's 'Get Me Off' chopped and screwed by Trent Reznor - again, this can only ever be a good thing - and the track's outright aggressiveness balances out the rest of the project's 'bubbling just under the surface' feel.

The title track is a great mix of reedy blues organ and drums which tease the listener into thinking they are about to drop any minute.  This closer is another good example of Morbidly-o-Beats' nack for creating sometimes minimal, yet always engaging, music.


Props to Morbidly-o-Beats and everyone else involved in these two fine releases.  Keep the good music coming, folks.