With alumni including Quincy Jones, Aimee Mann, Arif Mardin, Tony Maserati and Roy Hargrove, Boston's Berklee College of Music is one of the world's most highly esteemed music institutions.

Formed on the College's hallowed ground in 2011, LowTone Society, one of the most exciting new groups in music, have the potential to join these aforementioned legends as a name synonymous with musical excellence.

'Reel Me In' is sublime jazz full of lovely instrumentation.  An especially nice touch is the interplay between the horns and the acrobatic yet subtle flute.  The drums have a satisfying hip hop thump and the infectious chorus demonstrates Joanna Teters' ability to switch effortlessly from a smooth-but-smokey lilt into a rugged reggae delivery.

'LowTones' is a neo-soul number with warm Nord keys, expression-filled brass, Frankie Leroux's understated and engaging drums and Teter's message of determination again flitting from smooth jazz to reggae chatting, all culminating in a dynamic climax.

Both these songs show off the band's skill at mixing musical virtuosity with instantly memorable 'radio friendly' hooks and melodies.

The John Legend-meets-Jay Dilla 'Paralyzed' is another heartwarming number.  'I Wanna be the reason you smile, show me the ways that you wanna feel, I will make this real' sings Teters.  And if you listen closely, the brass make a cheeky nod to a certain blue-eyed-soul classic in the bridge.


Just when you think you have the measure of the band, they start throwing curve-balls.  The live 'Dulce Conexión', featuring Ernesto 'Bebo' Rodriguez's lead vocals, is a welcome mix of latin jazz and a Roger Troutman-style vocoder workout.  The experimental 'Don't Think Feel' is a collage of found sounds glued together by massive electronic drums, dubstep wobbles and Teters' enchanting vocals.

Equally as comfortable on stage as they are in the studio, their live shows mix hip hop energy with traditional musicianship.  The band have shared the bill with Talib Kweli, Nappy Roots and Slum Village and have performed at legendary venues including Boston's The Middle East.

Expect the ten-piece's debut album in about a year.  In the interim, let LowTone Society reel you in with a sound which is classic, contemporary, intelligent and accessible all at the same time.

Vocals: Joanna Teters
Teters has released two albums and toured with her own band Mad Satta.  The group are busy working on their new album and can be checked out here.  Teters is also the lead singer in reggae bands Hi‐Gate Soundsystem and HubDub.

Vocals: Ernesto 'Bebo' Rodriguez
Bebo is nice on lead vocals and drums/percussion.  A star in his own right in Puerto Rico, Bebo has been guest vocalist for super-group Cultura Profetica.  He's currently wrapping up the recording process of his debut album 'El Guiso', which LowTone is recording two tracks for.  I have it on good ground that the album is fire.

Flute: Kalani Trinidad
A multi-instrumentalist, Trinidad has been referred to as ‘one of the brightest young stars in the Puerto Rico jazz scene today’ by jazztimes.com.  His flautist skills shine on 'Reel Me In' and he plays a mean vocoder on 'Dulce Conexión'.

Saxophone: Craig Hill
Craig was accepted into Berklee College at 17.  His saxophone playing can be heard on 'Reel Me In', ‘LowTones’ and, seductively sampled, on ‘Don’t Think Feel’.

Sound design & samples: Wigbert "Moduloktopus" Caro
Moduloktopus is already a The New Beat Maker favourite in his own right.  Like the rest of the group, watch his ascendency continue over the coming years, through his role in this superb ten-piece, as well as his solo efforts, side-projects and other collaborations. 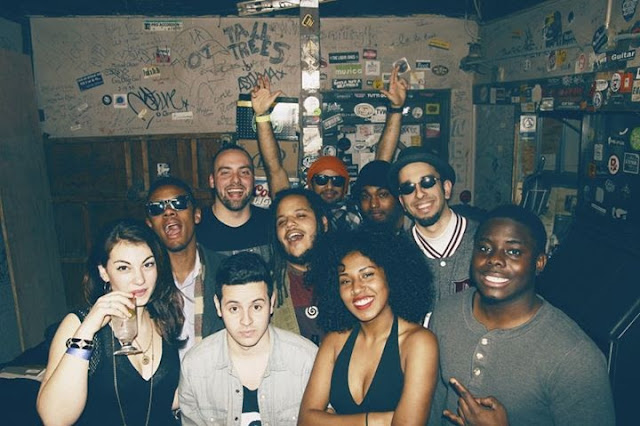