NEWS: I'm sharing two of the best Yo! MTV Raps Documentaries to mark the occasion

One of my favourite sites for all things hip hop nostalgic, upnorthtrips, pointed out that on the 17th of August 2005 the last ever Yo! MTV Raps aired.

In honour of this historic occasion, here are a couple of the best Yo! related documentaries I have absorbed (and sweated out my pores) this weekend.

?uestlove, Alchemist, MC Lyte and more speak on the importance and the influence Yo! MTV Raps. Part two puts a particular emphasis on the sartorial impact of hip hop as represented on the show: from NWA's 'Bad guys wear black' aesthetic to EPMD's love of bucket hats, from the Native Tounges' popularization of Afrocentric medallions, through to hip hop's adoption of Timberland construction boots.

A little more about Stussy x Yo! MTV Raps.  From the good folks at Stussy:

For the Stüssy X Yo! MTV Raps collection, we have selected 10 seminal artists from Yo! MTV Raps’ time on air for a series of t-shirts and fleece pieces available now at Stussy.com US, Stussy.com EU and at all Stüssy Chapter Stores.

A fascinating documentary which features great anecdotes from hosts Fab 5 Freddy, Doctor Dre and Ed Lover, Yo! production staff and other luminaries including ?uestlove, EST (3 X Dope), DMC, Nelson George and many more.

There are too many great moments to mention them all here; but highlights include performances by Run DMC and Eric B and Rakim, the controversial episode whereby Tupac gets himself indicted, James Brown getting down with Ed Lover and that classic final episode cypher including Rakim, KRS ONE and MC Serch. 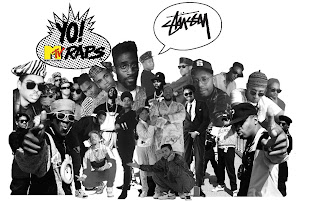 Sidenote: Rest in peace to Ted Demme.
Sidenote: Shout out to everyone else who didn't have Sky and so went round to a mate's house to catch the re-runs after school.
Sidenote: when will MTV wise up and release a box set of every episode?!