Wow.  The man, when it comes to mixing hip hop and RnB, Mr 'New Jack Swing' himself talks to his good friends Dave and Herb on a number of fascinating topics.

Subjects up for discussion include Teddy's work on Michael Jackson's criminally underated 'Dangerous' project; how his remix of Jane Child's 'I Don't Wanna Fall in Love' saved him (in his words); his work on Blackstreet; and how he managed to create music 'hard enough for the rappers, but smooth enough for the singers'.  Another classic episode of 'Pensado's Place'.  Yep, yep. 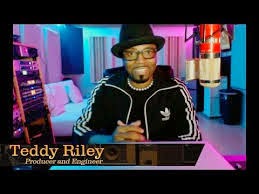 Above are just three of Teddy's classic's. Arguably the greatest producer of the 21st Century, his mix of hip hop, RnB, funk and pop created a whole genre of itself and (for better or worse) inspired further generations to mix hip hop and RnB which, we all know, became the dominant sound of the charts years after he had perfected it.