The Bill Laurance Project: A Feast for the Senses and the Soul

REVIEW: The Bill Laurance Project give a virtuoso performance in one of London's most beautiful settings

As a working church, an award-winning venue and a centre for those who are homeless and in crisis, Islington's glorious Union Chapel is multifaceted to say the least.

Just as multifaceted in a musical sense, The New Beatmaker favourite The Bill Laurance Project proved to be right at home in this intimate and beautiful setting.

This ensemble provided a masterclass in virtuosity.  Robert 'Sput' Searight's drumming was  explosive and precise; Michael League's bass was funky and fluid; and Bill's evocative and energetic keys engaged in a wonderful interplay with Katie Christie's rich French horn and the West Side Trio's dynamic strings.


The captivating 'December in New York' from latest LP 'Swift' was even more sublime in the live forum.  Credits: youtube.com/user/groundUPmusicNYC

The wide range of influences and disciplines explored in Laurance's albums 'Flint' and 'Swift' were fully represented here in a dramatic mix of jazz and world melodies, with drumming that merges jazz with d'n'b, broken beat and dubstep.  At points, Annie Tangburg's cello phonically fluctuated from quintessentially classical to sounds more commonly associated with wah wahs, talking steel guitars and vocoders.  Not to be outdone be such sonic shape-shifting, League switched from smooth funk bass to over-driven rock guitar in a heartbeat.  From the classical piano to a nifty Roli Seaboard (a rubber keyboard that Bill called 'the future of keyboards'), the amiable and witty Laurance was also on top form throughout.

The wide range of influences and disciplines explored in Laurance's albums 'Flint' and 'Swift' were fully represented here in a dramatic mix of jazz and world melodies...

Unsurprisingly perhaps for a church which welcomes many a spiritual and secular act, the acoustics were fantastic and the sound-man must also be given credit for making the Project sound even better on stage than they do on wax.

Complete with beautiful stained glass windows above the stage and a tasteful helping of laser lights piercing through an ethereal fog effect, this gig was a feast for the eyes but, most importantly, for the ears and soul. 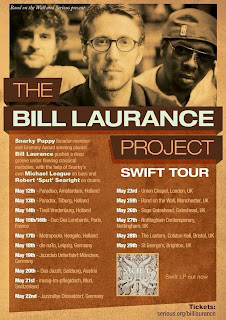 The Bill Laurance Project is currently on tour in the UK, for more info and tickets, visit: billlaurance.com.