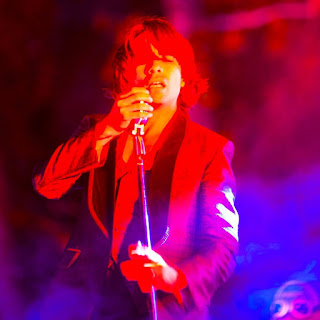 A slice of swaggering, sensual, big band pop, ‘Colibri’ is a superb offering from the singer songwriter.

‘Colibrí’ immediately demands listener attention thanks to punchy horn stabs, satisfying drum fills and Georgel’s strong vocals.  Listener attention is maintained throughout due to the athletic and theatrical flair of both vocals and instrumentation. These theatrics never descend into ham or kitsch.


(‘Colibrí’ would be) as much at home in a big-budget Hollywood musical or Broadway show as it would be on your favourite music streaming service.

Sexy and tasteful, funky, fun and polished, ‘Colibrí’ shows Georgel is a superstar in the making.

‘As a producer you hope to work with artists who possess nice talent and have something to say. Georgel fits that description. The juxtaposition of classic pop songwriting combined with earnest lyrics about universal love is what makes his music fresh and unique”.

Georgel’s Music formative years started at the age of 12 studying Bel-Canto with renowned Mezzo-Soprano Martha Felix and took a radical shift at the age of 15 when he was awarded a full ride scholarship to Berklee College of Music where he focused in Songwriting and Performance. His years in Boston allowed him to collaborate and share stage with fellow students Esperanza Spalding among others.

At 22 he moved to LA to pursue a successful songwriting career and some of biggest latin stars such as Gloria Trevi have recorded his songs. It wasn’t long until Music Mogul Sebastian Krys discovered him as an artist and started developing a new sound for latin music’s future.

“Colibrí” is the second song released of his upcoming album project “Rio” set to be released in 2019.

Check out more:
About Me, Lee TNB AKA Monkey Mind - thenewbeatmaker.com:

Get confidential and personal feedback on your music from me, with a ten day turnaround time for less than 5 Euros.

My tastes range from jazz to house and hip hop and I love helping artists develop their sound.

Click the link below to be taken to my HumanHuman page: