REVIEW: The New Beatmaker favourite changes his name, hones his craft on potential best album of 2020


Producer, Sound Engineer, Musician and Videographer Objects In Orbit has been a favourite of the site since 2013. 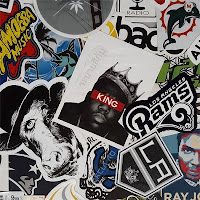 Whilst there is not a single bad project in the catalogue of the artist formerly known as Evil Alex, he has evolved and improved almost constantly from one project to the next.

He is a master of sonic suspense with many of his projects sounding perfectly at home in an art installation or art-house cinema.

He often incorporates eerie, industrial stylings and at times dissonant tones.  Whilst predominantly instrumental, Objects In Orbit finely weaves into layers of musical samples either long stretches of dialogue, which make the listener feel as though they are eavesdropping on private conversation, or snippets of vocal outbursts meshed together to create a dreamlike and at times contradictory tapestry.

As well as what I have previously dubbed 'uneasy listening', Objects In Orbit can throw down dusty, funky, danceable grooves, balancing out the weightier and darker elements of his musical oeuvre.

Object In Orbit's skill at mixing heavy sounds and subject matter with funkiness is especially evident in 'Panoramas', arguably his most accessible and accomplished work to date.

...mixing heavy sounds and subject matter with funkiness, 'Panoramas' is arguably his most accessible and accomplished work to date


The album’s themes include the space-race and cold war paranoia, Hollywood and the media's objectification at women, yet it is not weighed down by the gravity of subject matter.

“The fantastic ease with which human beings make adjustments”

Following a disorienting mix akin to The Twilight Zone, full of whirring sounds and voices discussing the vastness of space and alien invasion, we enter a very funky musical landscape evoking ‘Fear of a Black Planet’ era Public Enemy, albeit a few bpm’s slower.

A number of disparate samples, chops and loops sit together in this delicious sounding psychedelic stew, atop really satisfying drum grooves which have some great syncopation and swing on them.

The drums on this project arguably have a looser feel than those on previous (FKA) Evil Alex projects.  I’ve always liked Objects In Orbit’s drums, but on this project there is, I feel, a shift from a more ‘industrial’ sound to a looser, swing heavy, funkier feel.

Track two again gives the impression that the listener is eavesdropping, apparently on someone’s psychoanalytical counselling session or subconscious mind.

The introspective samples of a young lady discussing various physical and mental health issues are juxtaposed with vocal snatches discussing photography and, as the title suggests, how the image you see is not an accurate representation of reality.  This has of course numerous levels to it.

I love how Objects In Orbit opens tracks like this with addictive little introductory beats and samples which segue into the main track, reminiscent of DJ Premier’s ‘Supastar’, for example.

This track comes in with an almost Mr Scruff sounding jazz sample which sits satisfyingly in and around vocal snippets about the size of a space shuttle.  Again the song focuses (pardon the pun) on photographs, this time images of Earth from space.

Like many great sample-based hip hop producers, such as Prince Paul, MF DOOM, Madlib and The Avalanches, Objects In Orbit weaves together seamlessly samples that are sonically and emotionally contradictory.  Something very comedic, almost whimsical will interrupt and contrast a moment of anxiety-inducing information, revelation or emotional outburst.  This provides balance to the musical and emotional tone.

On this track especially, the more sinister / unnerving or ‘deep’ elements are balanced by its funky, loose, bouncy arrangement and comedic vocal clips from old black and white movies and cartoons.

“We think the third revolution is electric propulsion”

This is also the first time I notice the phrase “Me too” in the mix.  More on that later.

Alex has spent time living in Los Angeles and Arizona and I think the influence of both can be detected in the project.

One theme explored is the overlap between space exploration, aircraft technology and air-to-air combat, as though the massive, secluded deserts in both regions with long legacies of military testing and the like have seeped into Orbit’s musical psyche.

This is arguably also reflected in the project’s sonic texture, creating the contradictory sensations of liberation and claustrophobia, similar to that experienced when encountering huge expanses of hot desert sands below clear blue skies.

Ideas about ‘what is real’, space exploration and exploitation, the media and objectivity, sexism, the image and the male gaze are developed further here. ‘Venus’ in the title itself is a double entendre.

Vocal snippets link an actor who begins to forget he is only playing the character of an astronaut with a man reciting the type of qualities “which brings real beauty to a woman”.

Objects In Orbit’s ability to weave the profound, even horrifying, with the comedic is perhaps best illustrated on this track.  A sleazy sounding voice claims that he “could really go for a power fuck right now” and a number of voices respond “Me too”.  The voices increase in number and animation and what starts as a Freudian, x rated quip brings to mind the recent Hollywood sexual assault revelations.

Musically, the first half of this track is a stripped-back affair whilst the second half has heavily panned droning samples.  Gorgeous, heavily affected ‘handclaps’ (which I believe may be water droplets) take the track out.

This track has lovely, melancholic jazz samples weaving in and out of what sounds like a piano being put through a trash compactor followed by a smooth segue into the second part.

Given that this album was completed in January 2020, the prescient vocal snippets complaining of high fevers and warning of credit crisis are especially unnerving.

Whilst jazz influences can be found throughout the project, they really come to the fore in these last three tracks.

Initially a latin-jazz flavoured hip hop work out with increasing similarities to The Avalanches switches into frenetic, polyrhythmic drums that, in another time and place, could be the basis for a ‘Crazy in Love’ / ‘1 Thing’ type RnB banger.

Throughout the project Orbit’s chopping and flipping of samples is superb and, whilst no track outshines the others in this respect, ‘Easy Tiger’ is a great example of this skill.

The Moon & The Other Things

A brief, uptempo and ominous sounding track which riffs on the sun, moon and manmade satellites.  The track seems to be in a rush to get somewhere, echoing America’s obsession with ‘bigger, faster, stronger’ and the space race era.  You almost feel as though you need to slam on the breaks.

The beat slows down in the last twenty seconds amidst talk of crashing and weapons and snippets like:

This is a track that you can dance to just as easily as you could have an existential anxiety attack to.  You won’t hear that said very often, I’m sure.

Reminiscent of MF DOOM as King Gedorrah mixed with early RJD2 and Massive Attack, this is a staggering finale.

The first half is built around a 3/4 jazz sample with haunting layered vocal snippets which don’t so much ‘sit’ atop the rhythm but seem to float above it like some sort of phantom.

There are some great spoken word poetry type snippets as well as Biblical quotes and urgings that “we need to rewrite the history books”.

If you love the work that Massive Attack has done with Liz Fraser, you’ll love this


If you love the work that Massive Attack has done with Liz Fraser, you’ll love this.  There’s a similar, otherworldly tone to the female vocals and overall production.  It really is goose bump-inducing.

The final half combines a Timbaland style, skittish drum programme with more chauvinistic samples interspersed with talk of how the world has changed in the last 8 years and how “fucked” we are.  This feels all the more pertinent in light of this year’s Covid-19 crisis.

The haunting female vocals are reintroduced to, depending on your frame of mind, sooth you to sleep lullaby-style or keep you awake in an “I need the light on when I go to the bathroom” vibe.

“Recording live…From a world that no longer makes sense”

Playing to a world that makes less sense now than when the project was conceived.

This project shows Objects In Orbit at his most cohesive thematically but also his funkiest.  For all the intense, heavy subject matter, he really appears to be enjoying the creative process.

In both subject matter and psychedelic, wall of sound funkiness it brings to mind classics such as Three Feet High and Rising, De La Soul is Dead and Fear of a Black Planet.

Objects In Orbit’s mixing and mastering is bigger and brighter on this project, in a way that should bring him new fans without alienating old ones.

An album as expansive as it is focused, 'Panoramas' is a strong contender, not only for my favourite FKA Evil Alex project, but my favourite album of the year.